I got a bit of the spring fever today and deleted 732 blog posts. I stopped deleting at Mo's birth. But I might continue, might wipe the slate clean. Mo is 4 years old now, and Margo is 4 months. The baby is healthy and cheerful. The sisters adore one another. The biggest surprise here is that I am painting all the time. So much more painting than writing. My poor old blog got lost in the shuffle of life. It's a good thing, though, to be fully immersed in life. To stop standing behind the camera and be part of the action.
1 comment:

Today is baby's due date, but she's still camped out in my abdomen. Some reflections on this pregnancy as its days are numbered...

How completely different-feeling to carry a baby that isn't footling breech! (Still love Chuck Norris facts, though.) Aside from the weight loss in the 1st trimester and major indigestion throughout, this has been a very comfortable pregnancy. No bowling ball embedded in my ribcage; just a bowling ball flattening my bladder into a prolapsed pancake. Because my thyroid was under control beforehand this time, I did not have to take a ride on the hormonal roller coaster. And I've gained a less weight, ranging between 20 and 25 pounds depending on how much edema I'm rockin' on any given day. Gotta love having elephant legs.

I did need maternity clothes with this pregnancy, and started to need them early on. Almost everything was given to me secondhand from friends or was purchased at the thrift store near my house. I bought a couple of new Liz Lange shirts at Target, and the quality:cost ratio is very disappointing.

Although we found out baby's gender and chose a name for her early on (so we could tell Mo what to expect), I'm still inclined to think of it as an "it" until it is out in the world and alive and screaming. I felt that way last time, too. It's a defense mechanism. So many things can go wrong, even up to the end.

But seriously, she needs to get the hell out of my belly. Like now. Pregnancy has fully lost what little charm it had.

Also, we're planning to let our family know when baby arrives, but we're keeping it off social media until we're headed home from the hospital. (PLEASE be polite and do not post our news publicly until you see that we have posted something first!) Last time I was bombarded with phone calls and visits, and I've gotta tell you that was really difficult for me. I had had major abdominal surgery, and it was the first time I was ever hospitalized for anything in life. I was trying to figure out breastfeeding with a jaundiced baby who wouldn't gain weight. And I was suffering serious sleep deprivation. I let the pain get way ahead of me before starting any drugs, and I was fearful that the baby would evaporate if I closed my eyes. I think I maxed out around 36 hours before Robb started acting like a bouncer for me. I'm hoping the hospital can be a little more peaceful this time around. Well, as peaceful as the hospital can be...

Oh, right, the old wives tales. So I'm NOT drinking castor oil. Too gross. And evening primrose capsules seem like a bad idea. But I have been sitting/bouncing on an exercise ball and taking long walks around the neighborhood. Also I ate a whole fresh pineapple per my friend Brenda's recommendation. Do yourself a favor and never eat a whole fresh pineapple: it changes the acidity of your poop and makes you want to sit on an inflatable donut for a few days afterward.

Robb's out fishing this afternoon because it's a beautiful day, and he realizes his free time is going to take a major hit in the near future. Mo has a headcold and is watching "The Cat in the Hat" downstairs. And I'm sitting here trying to use Jedi mind tricks to induce labor. Wish me luck!
No comments:

Mommy had to get creative this morning 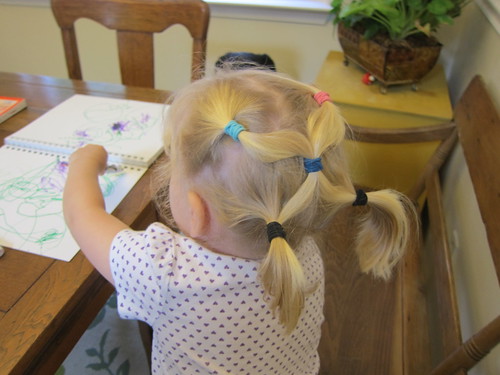 Robb had 2012. He got an iPod and a new truck and travel and jewels and stuff.

But 2014 is mine! I got a gestating fetus, a successful plein air event, Robb's iPod as a hand-me-down, and now my artwork is being featured at Bishop's Stock during June. (Click here for all the information.) My little paintings will be rubbing elbows with the work of 3 female artists for whom I have deep respect and whose work I greatly admire: Lynne Lockhart, Deborah Rolig, and Nancy West. Just look at their work for a hot minute. Holy crap!

The only rub, I'll be in Pittsburgh for the opening reception. And the rest of June is so crazy I will not actually get to go see my work hanging in person. But if you are going to be downa-shure (that's "down at the shore" in Baltimorese), please take a ride to Snow Hill and check out the artwork, grab a nice meal at Harvest Moon, and some ice cream at The Emporium. You'll be glad you did!
No comments:

Command me to be well


Would you believe that the young man singing is only 24? Irish artist Andrew Hozier-Byrne performs "Take Me to Church." Rather disturbing video about human rights, hate crimes, equality. He'll be in DC at 9:30 Club on November 4th...eight days after baby's due date. "Command me to be well..." Yeah, not a chance I'm getting to that show.
No comments:

Pregnancy: it's not as fun as you remember it. Luckily the pukesies and misery of the first trimester are well behind me. I lost 8 pounds. But now I believe I am enormous. There was a week or so that I couldn't catch my breath when my uterus started its northern migration and jammed all of my organs into my throat. My yoga instructor would intone for us to enjoy one more round of deep breaths, and I could complete about 15 hummingbird-sized breaths in the allotted time. Otherwise, things are good. A little insomnia, a little back pain, and a desire for sauerkraut. Most of the time I sort of keep the pregnancy on the back burner and just chase after Mo. She tells me she has a baby growing her tummy, too. Nice show of solidarity. 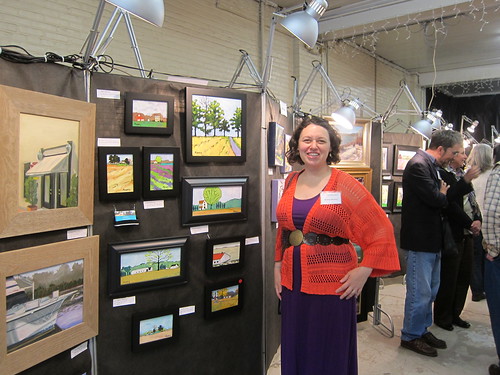 Here is my photo album from Paint Snow Hill. I should add a photo of my living room and call it "explosion at baggage claim." Slowly getting things put away and catching up on rest. This was my 8th year at PSH. There were 68 artists painting in the coldest, windiest weather the event has ever known. As usual I hid in my car. My mom came with me because a) it was Easter weekend, and b) I'm pregnant! I've had terrible morning sickness this time around, and everyone was worried I would keel over in a ditch. So Mom offered to tag along to keep an eye on me. And we had a great time together. And then I sold 9 paintings at the show. Take that in for a moment: NINE PAINTINGS! Every painting in the picture above, gone. I finished a painting of All Hallows Church on Sunday morning, and that one stayed behind for the May show at Bishop's Stock. So the only thing I brought home with me was the Lissa Abrams painting "Pine Bank" that I purchased. I'm still sort of in shock about the whole thing and not entirely sure what to make of it.
4 comments: